I clearly recall the first time I heard the term “gaper.”

I was visiting my teenaged nephew, who resides in Lake Tahoe, and he was regaling me with stories about his day. At the time, he was on the Squaw Valley Ski Team, and as a longtime Tahoe grom, he had (and retains) little patience for clueless flatlanders. I interrupted him mid-sentence, and asked, “What’s a gaper?”

I should add that this was before I’d relocated back to Colorado, and the word had popped up at some point during my absence (and aging). 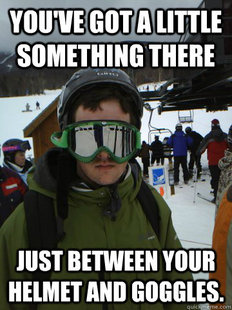 If my “clueless flatlander” comment didn’t give it away, a gaper is best-described as a hopeless newbie to skiing or riding (also known as a “spore, aka “Stupid People On Rental Equipment.” Thanks to writer Brad Narccarato for that one). Is this mockery of the folks who help ski town dirtbags who hate on gapers- yet earn their living from their business- nice? No, it is not. But damn, it’s fun, which is why I was asked to write this (very tongue-in-cheek) post.

The thing is- and this is what I most dislike about skiing besides the great expense- there are few sports that inspire a greater internalized pissing contest. It’s all about one-upmanship: How many days you logged on the mountain this season, what you’re skiing on this year, how much your gear cost, what sick technology your boots have, blabblahblah. Frankly, it annoys the crap out of me, far more than any gaper gaffe.

Still, the last thing you want while you’re on holiday is to be pegged as a novice, even if you are one. With that in mind, here’s a list of the most common indications you might be a gaper, along with links to some of my favorite articles and videos that will help you avoid being associated with this dreaded moniker (mainly, though, they’re just really, really funny).

In essence, if you’re acting like you’re having too much fun, or don’t care enough about what other people think, then you may be a gaper. And you know what? That’s just fine.