Rowan Jones found out he was accepted early decision to NYU-Shanghai and expected to start college as normal in fall 2020. Rowan’s future was bright and he was looking forward to living outside of his hometown, Arlington, Virginia for the first time in his life.

You can guess how the rest of the story goes for this Gen Z student. Rowan found himself spending his first semester of college in the basement of his parents’ home on video calls, doing the best he could to get through classes. On top of remote learning, NYU-Shanghai class hours posed the unique challenge of being from 10 PM-2 AM EST. Not only was Rowan isolated from friends, but he barely saw his family members (who lived under the same roof) due to the odd schedule. The basement was a far cry from the life filled with travels, adventures, and studies around Asia that Rowan had anticipated.

Rowan became increasingly forlorn. Finally, his mom suggested that Rowan go help his aunt move from Park City, Utah to Sun Valley, Idaho. If he spent some time in Mountain Standard Time, he might stand a chance at squeezing in some sunlight — and it could be a much-needed reset for the teen. So, Rowan set out west to help a family member and find a more favorable time zone for his tele-commute to Shanghai.

Rowan followed precautionary measures and wore his mask while helping his aunt with the move. A few days into his stay at the Limelight Hotel Ketchum, Rowan began to have some COVID symptoms. The teen was now 2500 miles from home, and his anxious parents nervously called the Limelight to inform them of the situation. The Limelight staff stepped into gear and came up with a system for the teen to quarantine in his room and eliminate any exposure to guests or staff. For 14 days, Rowan stayed in his room. The General Manager of the hotel — who became known to Rowan as “John from downstairs” — put in regular calls to the family of “Rowan from upstairs” in Arlington to calm their nerves and provide reassurances.

This feels like a situation from which a teen might emerge and never want to remember. However, things subsided and Rowan found himself back in Arlington on ZOOM in the basement. One day, he came upstairs and proclaimed to his mom, “I am moving back to Sun Valley and working at the Limelight. ‘John from downstairs’ told me to apply and I got the job. I start next week.”

The Limelight had made Rowan feel so much like family that he wanted to return to Ketchum. In a period that was so chaotic and stressful, Rowan found comfort in the staff and the walls of Limelight. He is now thrilled to serve as the front desk agent of the hotel and finds himself being just a little thankful for a silver lining that came out of the pandemic. Rowan hopes that he can pursue his dream of studying in Shanghai. In the meantime, he’ll be bringing guests the same happiness and solace that he found at the small mountain hotel amidst a strange and trying time. 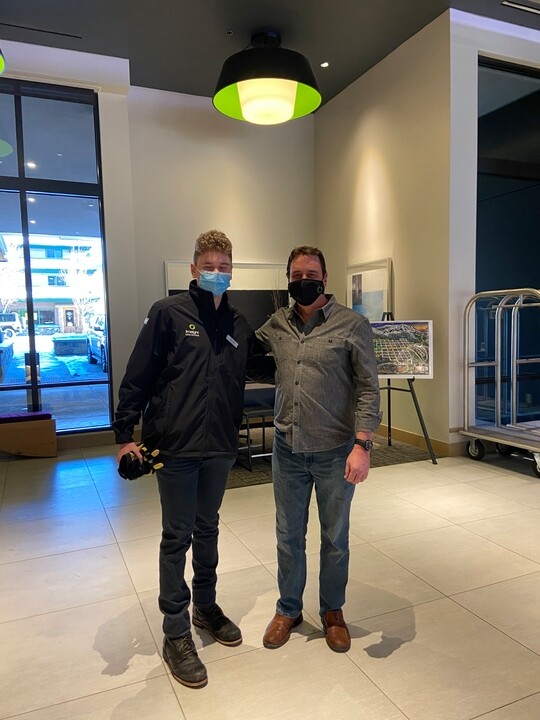 Photo of Rowen (left) and John (right) at the Limelight Hotel in Ketchum, ID.

**If you are interested in sharing this story in one of your outlets please feel free to reach out to mlynch@limelighthotels.com.